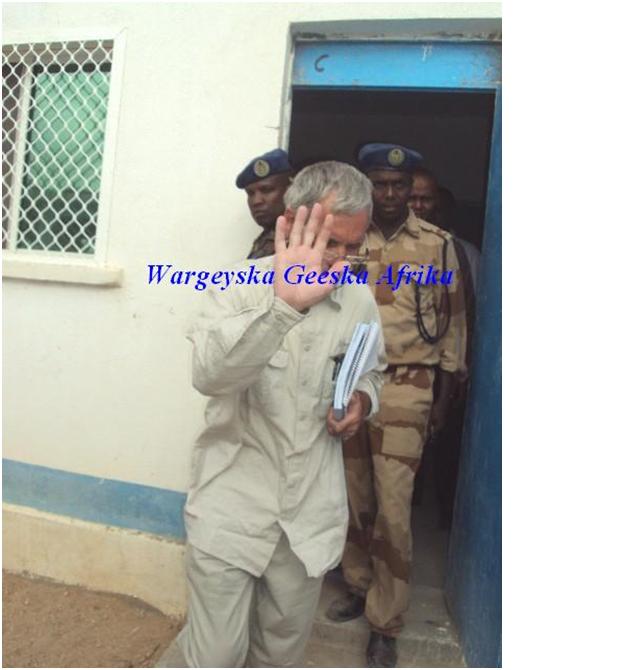 Mandhera (ANN)-The case of Mr. Gunter Bischoss and MS. Abdulkadir was concluded at Mandhera Police Academy after the regional court listened to 2 more witnesses-CID Commander Dahir Musa Abrar and a young man-by the prosecution and presented 17 photographs and other pictures

in a Flash Disc as evidence.
Pictures presented as evidence included picture young women who are said to be wanted, but have not been arrested by the police.
The two defendants denied any knowledge of when the pictures were taken and claimed that they were not authentic.
They requested that a photo expert be called to verify that the pictures were not authentic.
Highlights in the defense were when MS. Abdulkadir said, “I have been divorced long ago and the marriage certificate one of the witnesses presented was fabricated. She was also addressing Mr. Bischoss as Abdilfatah and remembered one of the photos to be authentic (A picture of her, Mr. Bischoss and her son).”
Mr. Bischoss for the first time told the court saying, ‘I am a Christian.”
His only request was to change his age from 62 to 72 but was denied by Judge Abdirashid Duran.
Her request was that she be pardoned because she is a mother.
At the end of the defence Mr. Bischoss told GEESKA Africa (a local paper – that the proceedings of the court were normal.
The hearing of the case on the 2nd day was closed after 6 hours of hearing , with two recesses. The case began on Saturday and what remained is passing judgment.

Mandhera (ANN)-The case of Mr. Gunter Bischoss-a Moslem and German national and Hodo (Alias Hibo) Abdirashid- began amid a very tight security in Mandhera Police Academy today.
Hargeisa Regional Court prosecutor Mr. Yusuf Abdullahi Sanjeh in his opening speech accused the defendants of 3 charges .Committing adultery (prostitution) encouraging prostitution and commuting extra marital sex.
The prosecution accused Mr. Bischoss of taking nude photographs for business.
Judge Abdirshid Duran then asked the 2 defendants if they were guilty of the crimes they were accused .Both defendants answered that they were NOT GUILTY.
The judge asked the prosecution to present their case and evidence.
The prosecution presented 3 witnesses.The CID officers who investigated the case, the husband of the defendant MS.Hodo and the man who worked with Mr. Bischoss and handed the photographs to the authorities.
Defence lawyer Bashir Hussein Abdi cross questioned the 3 witnesses claiming that he was not satisfied with their evidence.
The prosecutor then requested to be given time to present more witnesses, to which the judge consented.
21 photographs –some nude of the defendants, pictures of other people and ordinary photos were presented as evidence. The defendant had an interpreter, who had spoke in his own language.

Human rights groups, religious people, the media and a large number of people were present.
Today’s session was adjourned after listening to the case for3 hours. No definite date was given for the second meeting.