Mubarak Refuses to Step Down 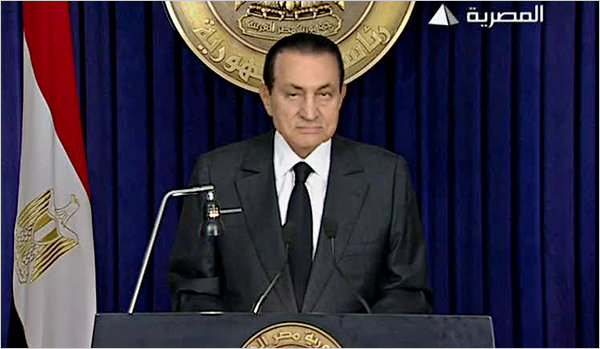 CAIRO — President Hosni Mubarak told the Egyptian people Thursday that he would delegate more authority to his vice president, Omar Suleiman, but that he would not resign his post, contradicting earlier reports that he would step aside and surprising hundreds of thousands of demonstrators

gathered to hail his departure from the political scene.

In a nationally televised address following a tumultuous day of political rumors and conflicting reports, Mr. Mubarak said he would “admit mistakes” and honor the sacrifices of young people killed in the three-week uprising, but that he would continue to “shoulder my responsibilities” until September, and did not give a firm indication that he would cede political power.

Even as Mr. Mubarak spoke, angry chants were shouted from huge crowds in Cairo who had anticipated his resignation but were instead confronted with a plea from the president to support continued rule by him and his chosen aides. People waved their shoes in defiance, considered an insulting gesture in the Arab world.

Mr. Mubarak said the process of political change initiated by his administration, including a dialogue with opposition groups, would not be reversed. But he signaled no imminent transfer of power and blamed foreigners for seeking to interfere in Egypt’s affairs.

“We will not accept or listen to any foreign interventions or dictations,” Mr. Mubarak said, implying that pressure to resign came from abroad as opposed to masses of people demanding his ouster through his country.

His statement marked the latest twist and turn in a raucous uprising. Earlier in the day, the Egyptian military appeared poise to assert itself as the leading force in the country’s politics, declaring on state television that it would take measures “to maintain the homeland and the achievements and the aspirations of the great people of Egypt” and meet the demands of the protesters who have insisted on ending Mr. Mubarak’s 30-year rule.

Several government officials said Mr. Mubarak was expected to announce his own resignation and pass authority to Mr. Suleiman.