Cairo(ANN)Thousands of protesters have gathered in Cairo’s Tahrir Square awaiting word on whether Egyptian President Hosni Mubarak will stay in office amid conflicting reports as he is expected to address the nation Thursday evening.

A senior Egyptian official confirms to Fox News that President Hosni Mubarak will step down shortly and transfer authority to the Egyptian Higher Council of the Armed Forces — but Egypt’s information minister tells Reuters that “the president is definitely not going to step down.”
The group is comprised of the minister of defense, Field Marshal Hussein Tantawi – who stands atop the military hierarchy – along with the military’s chief of staff, the chief of operations, and commanders of the Army, Navy, Air Force and Air Defenses. 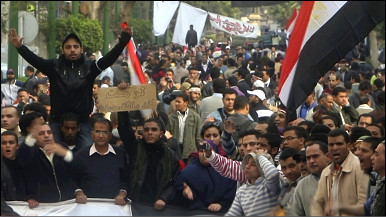 Egypt’s military has produced all three presidents the country has had since a 1952 coup led by Lt. Col. Jamal Abdel Nasser ended the monarchy, and the army remains a powerful force.
.
Key facts about Egypt are military:
.
It is one of the world’s largest recipients of U.S. military aid. Washington agreed to a $13 billion, 10-year aid package to Egypt in 2007.
.
Morale in the military and paramilitary security forces is good, partly because of a higher standard of living among the military than the population as a whole, according to Jane’s Intelligence. The military monitors troops to keep Islamist influence in check.
.
President Hosni Mubarak was commander of Egypt’s air force during the 1973 war with Israel, which saw initial Arab victories before Israel’s counterattack defeated the Arab armies. Mubarak became President Anwar Sadat’s vice president in 1975 and became president when Sadat was assassinated in 1981.
.
Egypt’s military is among the largest in the Middle East. Older officers were trained in the Soviet Union, but younger ones studied in the west. Egypt regularly conducts joint military exercises with NATO.