In the days after Chanel Reynolds’s husband was hit while riding his bicycle near Lake Washington here and the best-case possibilities just kept getting worse, she was not yet consumed by grief. There were no dogged middle-of-the-night Web searches for faraway

cures for his crushed upper spine or tearful bedside vigils with their 5-year-old son.

Instead, the buzz in her brain came from a growing list of financial tasks that grown-ups are supposed to have finished by the time they approach middle age. And she and her husband, José Hernando, had not finished them. 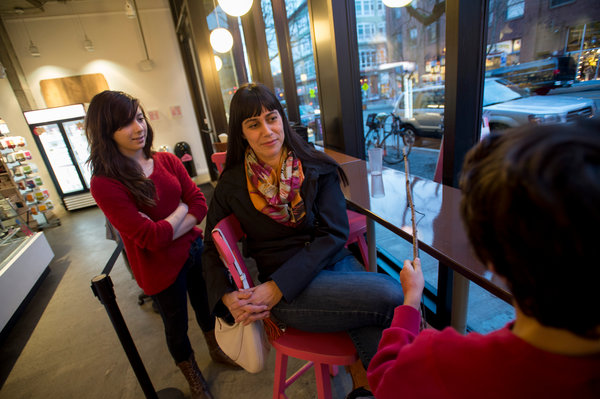 Chanel Reynolds with her stepdaughter Lyric, 16, and son Gabriel, 9. Her husband, their father, died in 2009.

“I was finding it really hard for me to stay present and in the room and to be able to hear what the doctors were saying because I was so overwhelmed with not knowing how much money we had in our checking account, and the fact that we had our wills drafted but not signed,” she said. “I didn’t know whether I was going to be able to float a family by myself.”

In the many months of suffering after Mr. Hernando’s death in July 2009, she beat herself up while spending dozens of hours excavating their financial life and slowly reassembling it. But then, she resolved to keep anyone she knew from ever again being in the same situation.

The result is a Web site named for the scolding, profane exhortation that her inner voice shouted during those dark days in the intensive care unit. She might have called it Getyouracttogether.org, but she changed just one word.

The site offers some basic financial advice, gives away free templates for a master checklist and provides starter forms to draft a will, living will and power of attorney. There’s also a guide to starting a list of all of the accounts in your life that someone might need to access and shut down in your absence.

All of these forms and lists are already out there on the Web in various places, though rarely in one place. But there are two things that make Ms. Reynolds’s effort decidedly different.

First, the world of personal finance suffers from an odd sort of organizational failure. We tend to organize our thinking around products: retirement accounts, mortgages, long-term care insurance.

But in the real world, it’s a big life event that often governs our hunt for solutions. Sometimes, it’s a happy one, like getting married. But there are few ready-made tool kits like the one Ms. Reynolds has assembled for people considering the possibility of serious illness or death.

The other thing that compelled me to sprint here right after I stumbled across her site Tuesday night was that it is not neutered, stripped of the mess of feelings that govern much of what we do with our money. Sometimes, we just need to meet the person in personal finance.

Maybe, just maybe, hearing the story of someone who has been there, in the worst possible way, can finally push us all into action.

And we desperately need to act. According to a survey that the legal services site Rocket Lawyer conducted in 2011, 57 percent of adults in the United States do not have a will. Of those 45 to 64 years of age, a shocking 44 percent still have not gotten it down.

People who get a fatal diagnosis from a doctor at least have a bit of time to sort things out. But Ms. Reynolds and her husband had made only a few plans.

Mr. Hernando was 43 years old on the day in July 2009 when a van mowed him down while making a left turn into the path of his bicycle.

He was a self-taught engineer who played guitar in a band called Moonshine back when Seattle was the world capital of rock. At the time of his death, he rode for a cycling team and was a Flash developer working at the highly regarded firm Frog Design.

Given all that vitality, death was the farthest thing from Ms. Reynolds’s mind when she kissed him goodbye after failing to persuade him to take their son along for the ride. Which was why she was confused when she checked her phone from a party two hours later and found 14 missed calls, none of which were from numbers she recognized.

After his death, this much was clear: The family with the six-figure income and the four-bedroom house that they had bought in the Mount Baker neighborhood one year before had a will with no signature, little emergency savings and an unknown number of accounts with passwords that had been in Mr. Hernando’s head.

What saved Ms. Reynolds, now 42, from ruin was life insurance. They didn’t have a lot, but they had just enough (a couple of hundred thousand dollars in the end) to keep her from having to go right back to work as a freelance project manager and sell the house at a big loss right away. It helped pay for the education of their son, Gabriel, who is now 9, and for Mr. Hernando’s daughter from a previous relationship, Lyric, who is 16 and still close to Ms. Reynolds and her brother. Ms. Reynolds now carries a $1,000,000 term policy on her own life.

So she did not go bankrupt. But the lack of a signed will ended up costing her thousands of dollars in unnecessary legal fees. And then there was the extended period of suspended animation, where she was trying to figure out where she stood with insurance and retirement accounts and phone bills but could not get the information that she needed without account numbers and passwords.
She describes that netherworld as a slow death by a thousand paper cuts. “Sometimes it was the one little, last thing that put me over the edge,” she said.

“I’m trying to figure out how best to take care of my son and when I can go back to work and how much I’ll lose on the house. And if I have to spend 30 minutes following up with some bank that won’t take a check from him, I just don’t have the extra 30 minutes to do this again.”

But she did it again and again, dozens of times, following the same “Hello, my name is Chanel and my husband just died and I need access to X account” script. Once she had enough emotional distance from it all, she created her Web site, where she tries to persuade others to take a couple of hours now to spare themselves countless hours of hardship later.

It’s true that her efforts are not unprecedented. Nolo helped pioneer a do-it-yourself legal movement, and its state-by-state materials are thorough. Several commercial sites can help store and sort your documents and accounts, including organizemyaffairs.com, estatedocsorganizer.com, legacylocker.com, aftersteps.com, thedocsafe.com and safeboxfinancial.com.

There are a few things about Ms. Reynolds’s site that seem unique to me, though. The first is her raw insistence on considering what it means if you’re having trouble finding the right people to serve as your estate’s executor or to inherit prized possessions.

“If you are at a loss for whom to name, get out there and tighten up your friends and family relationships,” she writes on the site. “Find some better friends. Be a better friend. This is everything. This means everything.”

It did for her, at least. “I felt really lucky when I went down my favorites list on my iPhone at the hospital, and everyone showed up,” she said. Hospital staff eventually had to gently inform Ms. Reynolds that her large group of supporters was getting in the way.

She also urges people to leave traces of themselves. This is particularly crucial for parents who fetishize every piece of preschool artwork and capture every meaningful moment but rarely come out from behind the camera themselves.

Forget about just preserving memories of your children for yourself. What about the things that they may need to remember you by?

I asked two lawyers for feedback on Ms. Reynolds’s efforts. Bill Cahill, a lawyer who writes wills for many people who live near me in Brooklyn, said that her legal templates were infinitely better than nothing.

He did lament Ms. Reynolds’s choice of a name for her Web effort. “It seems to me that the whole process deserves more dignity,” he wrote in an e-mail message.

While a private admonition to get it together may well be worthwhile, he added, “the coarseness of the communication is not appropriate for the public square.”

Ms. Reynolds considered this but decided that she needed to be honest. “Those were actually the words that came out of my mouth in the I.C.U.,” she said. “To try to come up with another word to describe something that is part of my own personal experience is too hard to do for me, and it doesn’t, for me, communicate the level of importance and intensity and emotion that comes along with the content.”

Diana S.C. Zeydel, a shareholder at Greenberg Traurig in Miami and chairwoman of the estate and gift tax committee for the American College of Trust and Estate Counsel, applauded Ms. Reynolds’s consciousness-raising efforts.

But she worried that some people who adopted Ms. Reynolds’s sample will (from a template derived from her own Washington State will, which she wrote with the help of a lawyer) as their own could end up worse off than if they had nothing, depending on their circumstances.

It is not surprising that a lawyer would urge you to consult a lawyer, and Ms. Reynolds is not at all opposed to anyone doing so. She also doesn’t accept the idea that anyone even remotely like her and her late husband cannot afford it. “If people can save to go on vacation, they can save to do this, too,” she said.

Ms. Reynolds’s Web site is only four days old as of this writing, and within 24 hours it had been shared over 100 times on Facebook.

She has already heard from a social worker in Santa Fe, N.M., who was near retirement and had not yet pulled her financial records together and a 22-year-old with no children who is now considering a living will.

So already, Ms. Reynolds feels that it’s been worthwhile to share her own experience, if only to help people feel the relief that she now feels because she has her act together.

“It takes way more energy to worry about something than it does to be relieved,” she said.

“It makes a lot more space for joy and gratitude and happiness. And the rest of your life.”