New york(ANN)The church crowd gathered before a giant screen to witness the inauguration ceremony in Washington and hear Obama’s speech which touched on King’s “I Have a Dream” speech delivered 50 years ago in Washington. 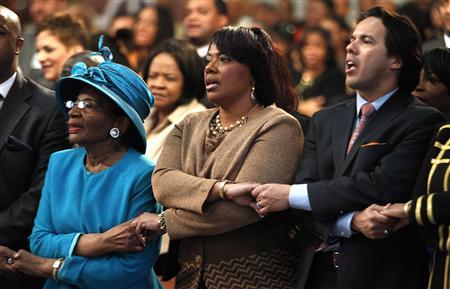 t was, for all the half-met promises of the last four years, the defeats and disappointments, still a time to celebrate. Nobody had expected Monday’s inauguration to ascend to the impossible standards set by Barack Obama’s first swearing-in ceremony, when 1.8m people stood for hours in the bitter cold of a January morning, to claim a small part of the historic swearing-in of the first African American president.

But for the tens of thousands of people who streamed towards the Mall on Monday, all on foot, some with small children in push chairs or elderly people in wheelchairs, solely for the chance of catching a glimpse of Obama from a distance of up to a mile away, there was no sense of diminished occasion.

It was, if anything, a strangely intimate celebration – if you can call anticipated crowds of up to 800,000 an intimate experience.

“I was here four years ago, and for me the energy is the same. I’m still excited, still hopeful about what he is going to do in the next four years,” said Ericka Jeter, a high school science teacher in Washington DC who was waiting at a security checkpoint.

For her friend, Vonne Jones, a doctor from Houston, the occasion was made greater by the timing. Monday was Martin Luther King Day.

Obama last week proposed a package of measures intended to reduce gun violence following the Newtown, Connecticut, school shooting that killed 20 first grade students and six staff members.
America’s concern over gun violence became the focus of speeches in Atlanta on Monday honoring Dr. Martin Luther King Jr., who led a non-violent struggle for civil rights before he was gunned down at age 39.

Crowds gathered at commemorative services across the country on the national holiday in King’s honor, the same day as President Barack Obama’s second inauguration ceremonies and little more than a month after the Connecticut mass shooting that touched off a national outcry over gun control.

In a ceremony in King’s hometown of Atlanta, his daughter Bernice King spoke at Ebenezer Baptist Church, where King was once a pastor. She recalled her father’s reaction after their family home in Montgomery, Alabama, was bombed in 1956 during a boycott of the local bus system.

Some black residents of the city were “armed that day, ready to protect their homes,” but King urged them to put away their guns, Bernice King said.

“This apostle of nonviolence perhaps introduced one of the greatest experiences of gun control that we’ve ever heard of in the history of our nation,” said Bernice King, who is chief executive of the King Center in Atlanta.

“Dr. King was a victim of gun violence,” said Omilami, daughter of Hosea Williams, one of King’s lieutenants in the civil rights movement.

The church crowd gathered before a giant screen to witness the inauguration ceremony in Washington and hear Obama’s speech which touched on King’s “I Have a Dream” speech delivered 50 years ago in Washington.

In his speech on Monday, Obama recalled King’s dream for freedom for all Americans, regardless of their race, ethnicity, or geographic or economic status.

“Our journey is not complete until all our children, from the streets of Detroit to the hills of Appalachia to the quiet lanes of Newtown, know that they are cared for, and cherished, and always safe from harm,” said Obama, who used a Bible that belonged to King at his swearing-in ceremony.

King’s father, Reverend Martin Luther King Sr., also was a pastor at Ebenezer Baptist Church. It sits on Atlanta’s historic Auburn Avenue near the King Center, established in 1968 by the slain activist’s widow Coretta Scott King, who died in 2006. On the avenue not far from the church is King’s grandparents’ home, where he was born in 1929.

Nearly a million people visit the King Center each year, viewing an eternal flame honoring King and crypts holding the remains of King and his wife and attending an array of programs promoting non-violent social change.

Around the country, where Martin Luther King Day has been a federal holiday since 1986, banks, financial markets and government offices were closed.

A march along Auburn Avenue was set for later in the day, and a rally to address such issues as education, housing, peace, justice and voter registration, organizers said.

Also planned was a Day of Service, with an array of community service projects in Atlanta in honor of King.