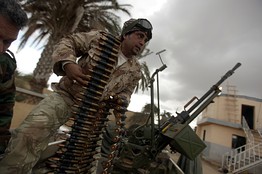 BENGHAZI(ANN)Libyan air-force officers who have defected to join pro-democracy rebels in eastern Libya said on Saturday they would defend eastern Libya against attack by forces loyal to Moammar Gadhafi, but would not go on the offensive.”We don’t want this to turn into a military battle between two armies,” said

defected Air Force Col. Nasser Busnina, who spoke to journalists, along with two other air-force colonels and a general, at Benghazi’s air base. “We will defend ourselves, but we will not go on the attack.”

Two wrecked armored cars stood outside the base. A military officer said they had belonged to one of Mr. Gadhafi’s sons, Saadi, and to Mr. Gadhafi’s intelligence chief, Abdullah Senussi, before both men fled eastern Libya during the uprising.
The officers said they had formed a committee to oversee the rebel’s air assets. Part of the air force had defected but parts of it still remained loyal to Mr. Gadhafi, they said.
The air-force colonels’ comments followed claims on Thursday

and Friday by defected army officers in charge of rebel forces in Benghazi that they were deploying stealth forces to Tripoli and preparing a full fledged assault on the western half of the country.

Col. Abdel Salam al-Qamati cast doubts on the rebel army’s capabilities to confront pro-Gadhafi forces guarding Tripoli and other pro-Gadhafi strongholds. He said that under Mr. Gadhafi, regular army forces were only given limited number of guns, and those that did have guns were only given seven bullets.
Col. al-Qamati said his fellow officers and men had sympathized with the people from the beginning, but couldn’t defect openly because they had been too weak to stand up to Mr. Gadhafi’s elite brigades, until those brigades had been driven back from eastern Benghazi by protestors.
One of the colonels said the rebel air force had no serviceable planes ready to fly.
Still, there were signs that the officers’ comments may be an attempt at misinformation aimed at Mr. Gadhafi’s forces in the west.
A senior manager working on the civilian side of Benghazi’s airport said he knew for certain that fighter jets were docked in working order in bunkered hangars at the airport, though he refused to say how many. Another civilian official who sits on one of the city’s leadership committees currently running Benghazi’s affairs also said there were fighter jets, transports planes, and pilots ready to go.
Another indication that the commanders may be attempting to deceive came during the press conference. Another air-force colonel, Attiya Mansour, who said he had come out of retirement to help lead the rebel forces, vowed their forces “would fight down to the last person.”
A quiet squabble ensued between Col. Mansour and one of the other colonels, Nasser al-Busneina.
“Don’t say that,” Col. Nasser al-Busneina quietly chided the first colonel in Arabic. “This is for inside information, not for the outside.”
Fathi Terbil, a human-rights lawyer who has emerged as a leading face of the uprising said at another press conference in Benghazi on Saturday that any decision on if and when to attack pro-Gadhafi forces in western Libya would be taken by civilian leaders in the east, not by military officers.
Mr. Terbil also hinted there were military plans in the works that were not being discussed publicly. “We are concerned about the security of some our strategic plans to help liberate other cities,” he said.
Mr. Terbil’s Feb. 15 arrest sparked the protests that have brought Mr. Gadhafi’s regime to the brink, and as a result Mr. Terbil commands broad respect among pro-democracy rebels in Libya.
They colonels said they had control of six military bases in eastern Libya and one base near Tripoli, the Mitiga Air Force Base, which sits in Eastern Tripoli.
At military bases in Eastern Libya, the tri-color flag of the monarchy that ruled before Mr. Gadhafi flies instead of the green flag of the Gadhafi regime. A Navy base in Benghazi has been renamed the “The Martyrs of February 17 Base.”
The local notables who have emerged to handle the city’s affairs, say they know Mr. Gadhafi’s loyalists and his network of spies still roam the city freely, ready to execute orders if the tide looks like it might turn.
In the meantime, people here say they believe the spies and loyalists are responsible for spreading a lot of the rumors that ripple through the streets each day, such as a rumor that made its way through Benghazi on Saturday that pro-Gadhafi fighters were fighting rebel forces on the town’s outskirts.
Iman Bugaighis, a university professor of dentistry who has become the top spokeswoman for the city of Benghazi, said that rumor appeared aimed at making people believe the regime was still capable of retaking control in the east.
“The pro-Gadhafi people are invisible now, but they are spreading rumors to frighten people,” said Ms. Bugaighis. “It’s systematic and this has been Gadhafi’s game all his life.”