Bahrain(ANN)Bahrainis took to the streets for a third day of pro-democracy rallies as Yemeni demonstrators and police clashed and theAssociated Press said violence erupted during the first protests in Libya against Muammar Qaddafi. Bahrain’s interior minister, Sheikh Rashid

bin Abdullah al- Khalifa, apologized for the killing of two protesters in clashes with security forces this week, saying an investigation is under way, the official Bahrain News Agency said. Hundreds gathered today at the funeral of a demonstrator who died yesterday. They demand democracy and the ouster of Prime Minister Sheikh Khalifa bin Salman al-Khalifa, a member of the Sunni Muslim royal family who has held the post for four decades.
The dissent in Bahrain, home to the U.S. Navy’s Fifth Fleet, follows the toppling of autocratic rulers by popular movements in Egypt and Tunisia and marks the spread of unrest into thePersian Gulf, where most of the Middle East’s oil is produced. Gulf states including Saudi Arabia and the United Arab Emirates are key U.S. allies, and Yemen is supported by the Obama administration in a campaign against al-Qaeda
“These movements are emboldening everybody who has grievances, whether they are a minority that wants to have equal rights or a majority that wants a functioning democracy,” Ebrahim Sharif, a Sunni who heads Bahrain’s National Democratic Action Society, said in an interview today. “There is a feeling of people being empowered by these movements, that we are powerful. I think we are affecting even Iran.”
Long-Serving Leaders 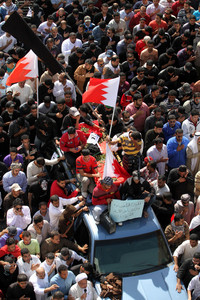 In Yemen, hundreds rallied for a sixth day, marching outside Sanaa University to demand the immediate resignation of the president of 32 years, Ali Abdullah Saleh. Government supporters attacked them with electroshock sticks. One person was killed during unrest in the city of Aden, Al Arabiya television reported.
In Libya, where Qaddafi has held power since leading a military coup in 1969, protesters demanding the government’s overthrow clashed with security forces in the port city of Benghazi, chanting “No God but Allah, Muammar is the enemy of Allah” and “Down to corruption and to the corrupt,” AP said.
The official news agency, JANA, cited a statement from pro- Qaddafi demonstrators in which they pledged to defend him and said the protesters were “cowards and traitors,” AP reported. State television said today’s rally was among “popular demonstrations” in support of the Libyan leader.
Iranian Protest
Anti-government protests inspired by the Arab revolts were put down on Feb. 14 in Shiite Muslim-led Iran, where many Shiite Bahrainis retain cultural and family ties. Majority-SunniSaudi Arabia, Iran’s main regional rival, has a Shiite minority in the Eastern Province, where most of its oil is produced.
Persian Gulf shares tumbled, with Saudi Arabia’s index sliding the most this month, on concern the unrest may spread farther.
The Saudi Tadawul All Share Index declined 1.8 percent, while Qatar’s QE Index retreated 1.8 percent. The yield on the Bahraini government’s 5.5 percent dollar bond due 2020 increased 1 basis point to 6.43 percent, the highest on record, at 3:16 p.m. in the capital of Manama, according to data compiled by Bloomberg. The cost of Bahrain credit-default swaps rose 7 basis points to 269 from the London close, according to CMA data.
The eruption of unrest in Libya helped boost oil prices, with futures rising for the first time in four days. Oil for March delivery rose 60 cents, to $84.92 a barrel, at 9:09 a.m. on the New York Mercantile Exchange.
Libyan Reserves
Libya has the largest proven oil reserves in Africa, with 44.3 billion barrels in 2009, according to the BP Statistical Review of World Energy. The North African nation pumped about 1.6 million barrels a day in January.
Shiites, who represent as much as 70 percent of the Bahraini population, say they face job and housing discrimination at the hands of the Sunni minority. King Hamad bin Isa al-Khalifa, the premier’s nephew, has ordered an increase in food subsidies and social welfare payments, and a grant of 1,000 dinars ($2,653) to each Bahraini family.
Bahraini Opposition
Seven Bahraini opposition groups in Bahrain formed a committee to help support the protests that started on Feb. 14, Sharif said. The demonstration they plan for Feb. 19 is expected to attract 50,000 marchers, making it the biggest ever in the kingdom, he said.
The committee, which includes al-Wefaq, the country’s largest Shiite group, will “provide support to the young people, help them organize and select leaders,” Sharif said.
The committee was formed late yesterday and will hold its first meeting today, he said. It will meet at least once a day to help coordinate the demonstrations and unify protesters’ demands, Sharif said.
Abdulnabi Alekry, chairman of the Bahrain Transparency Society, said the protests in Bahrain have no pro Iran theme and aren’t a demand for Shiite rule in the kingdom, as was the case in the 1979 Iranian Revolution that brought clerics to power.
“This movement is completely different than the Iranian experience,” he said as he took part in today’s funeral procession for the second man killed in the protests. “We want a genuine democracy, not clerical.”
To contact the reporters on this story: Glen Carey in Bahrain at gcarey8@bloomberg.net; Mohammed Hatem in Sana’a at mhatem1@bloomberg.net.
To contact the editor responsible for this story: Andrew J. Barden at barden@bloomberg.net.
Source; bloomerg.net