British forces could be in action over Libya as early as Friday, if a UN resolution is agreed, a senior government source has told the BBC.
BBC political editor Nick Robinson said the source stressed talks were continuing and it could take longer, but would be within days of a yes vote.

Tripoli(ANN) The UN Security Council is expected to vote on whether to authorise a no-fly zone in Libya within hours. Russia and China are expected to abstain, rather than use their veto. The UK, France and Lebanon drafted the resolution but others on the Security Council are wary

of a no-fly zone.
Downing St said Prime Minister David Cameron had called Arab, African and European leaders to “make the case for strong action” by the UN and will continue making calls on Thursday evening.
A draft UN resolution tabled by the UK, France and Lebanon on Tuesday proposed a ban on all flights in Libya, authorised member states to enforce it and called on them to participate in it.
Diplomats ‘hopeful’
But on Thursday the US, which had been cool on the effectiveness of a no-fly zone, said the UN should go further. Diplomats are debating a strongly worded draft resolution calling for “all necessary measures short of an occupation force” to protect civilians under threat of attack from the Gaddafi . 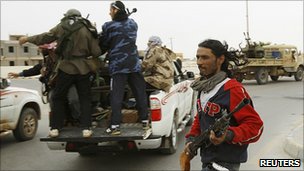 Diplomatic sources at the UN say five countries are expected to abstain from the vote on the Libya resolution, including Russia and China.
Nine votes are needed for the resolution to be passed but Nick Robinson said senior diplomats were hopeful it would be.

We will do our utmost to ensure the passing of a resolution which places the maximum pressure on the Libyan regime”
William HagueForeign Secretary
The BBC’s North America editor Mark Mardell said sources had told him that if the resolution was passed, air attacks on Col Muammar Gaddafi’s forces could begin within hours. He said the first attacks would be unilateral actions by the British and French airforces – which were likely to get logistical support from Arab allies.
The vote comes as Col Gaddafi warned people in rebel stronghold Benghazi his troops are coming “tonight” and there would be “no mercy” – he told rebels those who laid down their weapons would be pardoned.
In response to warnings from Libya’s defence ministry that any outside attack would trigger retaliation and destabilise the Mediterranean region, the Foreign Office said Britain would not be diverted from its objective.
Earlier UK Foreign Secretary William Hague admitted getting agreement for a no-fly zone “will not be easy” but he told MPs action was needed to protect the “beleaguered and oppressed” people of Libya.
“We are arguing urgently for a new UN resolution that would improve our ability and that of our international partners, including the Arab world, to protect and support the civilian population in Libya,” Mr Hague told MPs during a debate on events in the Middle East and North Africa.
‘Maximum pressure’
“I must not pretend that agreement on this will be easy… but we are clear that it is right to seek authority for a combination of these measures for the people in Libya, for all those in the region campaigning for change and for Britain’s national security.
“We will do our utmost to ensure the passing of a resolution which places the maximum pressure on the Libyan regime and which extends protection to the beleaguered and oppressed civilian population of Libya.”
For Labour, shadow foreign secretary Douglas Alexander said the international community had been “disunited” over the issue of a no-fly zone and must now speak with “one voice”.
“Uncertainty as to the international community’s position has not simply delayed action but it will have been closely observed in Libya itself.”
Former Lib Dem leader Sir Menzies Campbell said the UK and its allies should bear in mind the long-term consequences of the Libyan leader remaining in power as well as the humanitarian implications of a full-scale assault on Benghazi.
“If he restores his grip on the whole country then he will feel strengthened,” he told the BBC.
“This is the man who we persuaded to give up weapons of mass destruction some years ago and we persuaded not to give financial support to terrorists outside. This man could quite easily go back on these undertaking and promises and be a great source of instability in the region and much further afield.”
Araweelonews Mobile
source BBC News