Washington (ANN) — There is a good chance NATO pressure will encourage Libyan tyrant Moammar Gadhafi to leave power, the U.S. NATO commander told Congress Tuesday, but the opposition that could come in the Libyan leader’s wake has “flickers” of al Qaeda.

While there is a wide range of possible outcomes in Libya, running from a static stalemate to Gadhafi cracking, there is a “more than reasonable” chance of Gadhafi leaving power, Adm. James Stavridis said before the Senate Armed Services Committee,
But potential “flickers” of al Qaeda and Hezbollah elements have been seen in intelligence regarding the Libyan opposition, which is poised to take power if Gadhafi leaves, Stavridis said. However, he added there is no evidence of a significant presence of al Qaeda or other terrorist groups. Stavridis is also the commander of U.S. European Command. 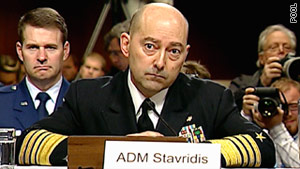 Adm. James Stavridis says there is no evidence of a significant presence of al Qaeda in the Libyan opposition.


“The intelligence that I’m receiving at this point makes me feel that the leadership that I’m seeing are responsible men and women who are struggling against Col. Gadhafi,” Stavridis added.
The comments come the same day as U.S. Secretary of State Hillary Clinton met with a leader of Libya’s opposition in London. Clinton and the heads of 40 other countries met Tuesday to discuss Libya’s future.
A senior counterterrorism official, unnamed because he is not authorized to speak on the record, backed up Stavridis’ assessment, downplaying the concern about al Qaeda among the Libyan opposition.
There is probably “a sprinkling of extremists to perhaps include al Qaeda” in Libya among the rebels, “but no one should think the opposition is being led by al Qaeda or one of its affiliates,” the official said. Al Qaeda has had a presence in North Africa for years. It “wouldn’t be surprising if small numbers — a handful”– of extremists or al Qaeda are in Libya.
“It’s hard to tell who all the leaders are in the opposition,” the official said, but “the rebels do not appear to be adopting an al Qaeda bent or ideology in Libya.”
If Gadhafi’s forces cease fighting there would be a series of decisions on how NATO should proceed. Leading the senators through the NATO command chain, Stavridis said the intelligence and ground assessments would work their way up through NATO, first going through Canadian Gen. Charles Bouchard leading the NATO operation in Libya, then up to Stavridis and eventually going up to the United Nations for the ultimate decision on course of action, Stavridis said.
“I think there would be actually another level that this discussion would have to go to, which would be the United Nations since the authority for NATO to participate in this operation is under the United Nations Security Council resolutions 1970 and 1973,” Stavridis pointed out.
During this process there would be a pause in NATO activity over Libya.
But for now the fight is still very much on. No-fly air zones have been set up to allow air assets to strike Libyan forces if the civilian population is threatened, Stavridis said, going beyond a basic no-fly zone patrol mission.
For the first time, A-10 and AC-130 ground attack aircraft were used over the weekend in Libya, Vice Adm. Bill Gortney said at a press briefing on Monday. These aircraft fire machine gun rounds from cannons, up to thousands of rounds a minute, and due to their low-altitude flying ability provide more precision in densely populated areas. On Monday night, one A-10 aircraft attacked Libyan coast guard ships in the port of Misrata after reports were confirmed that the ships were firing at merchant vessels.
NATO is set to take control of the full operation in Libya including protecting civilians on Thursday, greatly easing the financial costs on the United States, which has already hit $550 million as of Monday, according to Pentagon figures. Of those costs, 60% were for munitions, the Pentagon said, including Tomahawk missiles, which cost $1.4 million each. The United States has launched approximately 200 since the beginning of the operation.
“Future costs are highly uncertain,” Pentagon spokeswoman Cmdr. Kathleen Kessler said, but the U.S. expects to incur another $40 million in costs over the next three weeks. After the transition to NATO control is complete, the Pentagon expects the cost of the U.S. support operation to drop significantly, costing $40 million per each subsequent month.
Araweelonews Mobile