CAIRO — Egyptian President Hosni Mubarak will make an “important speech” at the end of the day, marking his second public address since protests to his 30-year-role erupted eight days ago.In an earlier speech on Saturday,

Mubarak named a vice president who is considered his designated successor, and also sacked his Cabinet and promised economic and political reforms called for by his protesters. 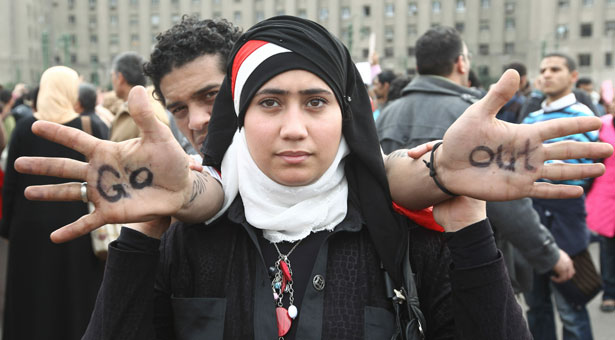 Hundreds of thousands of chanting demonstrators, meantime, continued Tuesday to pack downtown streets while thousands more jammed the airport trying to flee Egypt on Tuesday.
Throngs of men and women waved flags, chanted slogans and hung effigies of Mubarak, reveling in an unprecedented expression of political frustration and anger.

They responded to a call for a “million-man march” and a nationwide strike to force Mubarak from office.
The momentum of the demonstrations, which began a week ago, seems to have caught even the organizers off guard. Mostly young, they promoted their cause on the Internet and “never had it in their mind it would be a revolution,” said Alaa al-Aswani, an Egyptian author and political analyst.
Protesters have gained confidence with each passing day, pledging to remain in the streets until they bring Mubarak’s rule of almost 30 years to an end.

“The demonstrations will go on until he leaves,” said Wael Abu Halawa, 35, an imam who was among the thousands packed into Tahrir Square. Tahrir translates to “Liberation”; the square’s name honors the revolution in 1952 that forced the abdication of King Faruk.
The situation remained fluid Tuesday:
•The U.S. State Department has ordered non-essential U.S. government personnel and their families to leave the country.
•The exodus of foreigners and Egyptians from Cairo surged as dozens of evacuation planes arrived. About 18,000 passengers swamped the airport in the face of numerous canceled and delayed flights.
•Opposition leader Mohamed ElBaradei said Mubarak “must leave to avoid bloodshed.”
•Egyptian Culture Minister Gaber Asfour said the “revolution” by the country’s youth was spontaneous and served as a wake-up call for the government.

•Jordanian Prime Minister Samir Rifai resigned, and King Abdullah asked Marouf Bakhit, a former prime minister, to “launch a genuine political reform process,” the Royal Court said in a statement. Hamza Mansour, head of Jordan’s Islamic Action Front, said Jordan’s largest opposition group wants “an entirely new process, we don’t want new names.”
•The Western-backed Palestinian government in the West Bank said it will hold council elections “as soon as possible.”
In Cairo, groups of protesters poured through the narrow streets, where most businesses have been shuttered for days. Soldiers were positioned with tanks and armored personnel carriers throughout the city, but the army and protesters avoided confrontation.
Some protesters had their faces painted in the Egyptian national colors. Parents carried children on their shoulders. Spectators threw bottles of water to thirsty protesters from the balconies of surrounding buildings.
An effigy of Mubarak hung from a traffic light with a Star of David painted on its chest.
As darkness fell, protesters began singing Egypt’s national anthem.
“The determination is unshakable,” said Rania al-Malky, editor of the Daily News Egypt, an English-language newspaper. “Right now it is a battle of wills.”
Some analysts wonder how long the standoff can continue without a clash. Any march on the presidential palace could spark a clash with the Republican Guard, which is loyal to the president, says Dina Guirguis, research fellow at the Washington Institute for Near East Policy.
It’s not clear whether Mubarak has a strong grip on power or whether there is a struggle within his government. The military issued a statement saying it would not interfere in the protests.
“The army is the decisive factor,” al-Malky said.
Omar Sulciman, who was appointed to the vacant vice president post in response to the protests, declared that his government was prepared to undertake sweeping changes and encouraged the opposition to come to the negotiating table.
ElBaradei, who has emerged as the most prominent opposition leader, responded that the loose coalition of protesters would be willing to enter talks with the government — but only if Mubarak offered his resignation.
“The message is very clear,” al-Aswani said. “They’re going to stay in the streets until they hear Mr. Mubarak is leaving.”
Opposition parties remain disorganized. Some Egyptians say they are skeptical of ElBaradei, formerly head of the United Nations’ nuclear watchdog agency, because he has lived for years outside the country.
“He just came back to ride the wave of the people,” said Essam Abdul Qader, 64, an accountant.
Many Egyptians are worried about who would take over the country if Mubarak resigns.
“If he leaves power, this country will be lost,” said Sayed Naguib, 34, a filmmaker. “We’ve been living for 30 years in peace, without war.”
One of the most organized political groups in Egypt is the Muslim Brotherhood, an Islamist group with ties to al-Qaeda that seeks to impose a strict Muslim theocracy on Egypt. Though banned by Mubarak, the regime has allowed its members to run for office.
Osama Abu El-Eneen, 25, a pharmacist, said the Muslim Brotherhood may try to use the political unrest to gain power.
“I’m worried about that,” he said.
Egyptians have expressed frustration that the U.S. government has not directly called for Mubarak’s resignation. The administration says “beautiful words about democracy, but when it comes to real democracy, they do the opposite of what they say,” al-Aswani said.
Anti-U.S. sentiment is not at the center of the protests. Protesters have focused exclusively on Mubarak’s removal. “I want to express my voice and bring the government down,” said Ahmed el Komy, 29, a textile engineer. “We took it for 30 years, we can take it a few more weeks.”
By Jim Michaels and Theodore May, USA TODAY