Skip to content
During Wednesday’s debate in the House of Commons on the phone hacking scandal, several Conservative members of Parliament expressed concern that the issue was a distraction from far more important issues — among them, a famine in Somalia. Peter Lilley, for

instance, said: “I welcome the recall of Parliament. I am only sorry that we are not being recalled to discuss the problems of the euro zone, the slowdown in the world economy in the face of higher energy prices, and the famine in east Africa.”
On Thursday, that idea was expressed clearly, and controversially, on the pages of Rupert Murdoch’s Times of London, in the form of an editorial cartoon with the headline “Priorities.” The cartoon showed a starving Somali child holding his distended stomach and saying, “I’ve had a bellyful of phone-hacking.” 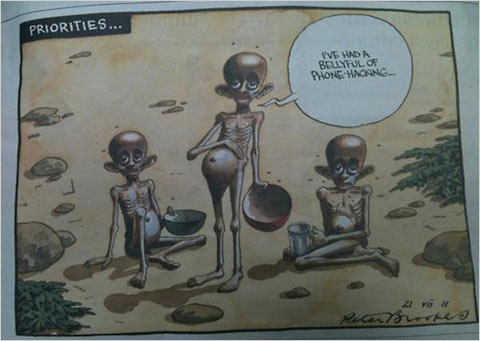 Katharine Viner, an editor at The Guardian, posted a snapshot of the cartoononline and asked: “What do people think of this cartoon in The Times

Earlier this week, another Murdoch-owned newspaper, The Wall Street Journal ran a combative editorial saying that news organizations not owned by News Corporation were reporting so heavily on the hacking scandal purely to damage a rival. The Journal’s opinion editors complained about “the commercial and ideological motives of our competitor-critics,” adding, “The schadenfreude is so thick you can’t cut it with a chain saw.”
During his testimony to a parliamentary committee in London on Tuesday, Mr. Murdoch himself made a similar charge. When asked whom he blamed for the scandal, he replied: “A lot of people had different agendas, I think, in trying to build this hysteria. All our competitors in this country formally announced a consortium to try and stop us. They caught us with dirty hands and they built the hysteria around it.”
The defenses of the phone hacking at The News of the World, which has been closed, came on the editorial pages of the most respected newspapers in Mr. Murdoch’s media empire.
In 2007, when Mr. Murdoch moved to buy The Journal, Ken Auletta of The New Yorker reported that part of the negotiation “focused on whether Murdoch could be trusted to keep his distance from news coverage, and what kind of independent board could assure this.” To assuage the fears of the family that owned the newspaper, Mr. Murdoch “said that he would be willing to establish an independent board to assure that editors were free from his whims.”
As Mr. Auletta explained, Mr. Murdoch offered to set up “a board like the one he had established for The Times of London and The Sunday Times, where of the 15n members only seven have no ties to News Corp., and where he can theoretically hire or fire the editor only with the assent of the board. In London, The Times board rarely meets, and is reliant for much of its information on Murdoch.”
The composition of that board, known as a “special committee,” was eventually outlined in detail as part of the News Corporation’s ultimately successful bid to buy Dow Jones, the publisher of The Journal.
Last week, Dow Jones reported that the special committee, “formed to monitor editorial integrity and independence at The Wall Street Journal and Dow Jones Newswires” in 2007, had issued a statement clearing the American news organization of any connection to the hacking scandal.
The Dow Jones report continued:
The statement of the committee, which is composed of independent journalism professionals, came a few hours after Les Hinton, Dow Jones’s chief executive officer, resigned. Hinton had been executive chairman of News International, the U.K. unit responsible for the News of the World newspaper at the center of the hacking allegations.
Of the hacking scandal, the committee said, “Such matters are deeply concerning to us, suggesting as they do a serious default of basic journalistic standards in certain units of News Corp.”
The committee added: “To date, nothing has come to our attention that causes us to believe that today’s resignation of Les Hinton as publisher of The Wall Street Journal is [in] any way related to activities at The Wall Street Journal or Dow Jones or that any of the London offenses or anything like them have taken place at Dow Jones. We will continue to monitor the situation closely.”
The committee has quarterly meetings. The members, each paid $100,000 a year by the company, are Thomas J. Bray, former editorial page editor of the Detroit News; Louis Boccardi, former chief executive of The Associated Press; Jack Fuller, retired president of the Tribune Publishing Co.; Nicholas Negroponte, co-founder of the Media Lab at the Massachusetts Institute of Technology; and Susan M. Phillips, dean of the George Washington University School of Business.
In 2007, Mr. Auletta suggested that Mr. Murdoch “seems to value even a trophy property like The Times of London less for its prestige than for its influence — its power to help sway elections, to promote his political ideas, and to protect his corporate interests.”
Minutes after Mr. Murdoch concluded his appearance before the parliamentary committee in London on Tuesday, Jay Rosen, a journalism professor at New York University, commented on Twitter: “News Corp. isn’t a news company at all, but a global media empire that employs its newspapers (and in the U.S., Fox News) as a lobbying arm.”
By ROBERT MACKEY