Skip to content
Manama/ Benghazi(ANN) Jubilant and newly confident Bahrain protesters poured back into Pearl Square Saturday after the Army withdrew. In Libya, protests were met with deadly force and Internet access was cut

The Bahraini Army pulled out its tanks and police withdrew their forces from the main demonstration site Saturday, allowing thousands of jubilant protesters to pour back to what they called “their land” just one day after violent clashes.

Skip to next paragraph 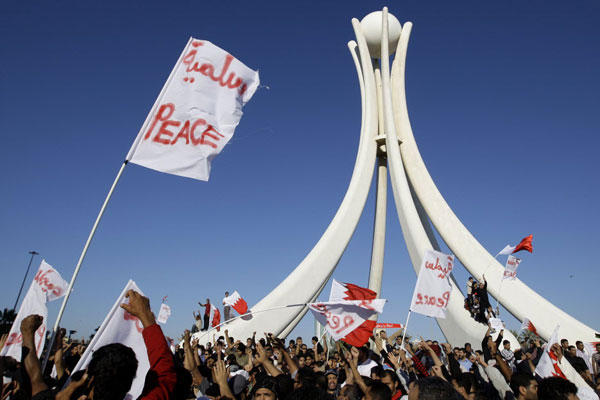 · From Libya to Bahrain, Mideast autocracy under fire

But whether the sight of cheering, crying, and grateful Bahraini protesters pouring into Pearl Square was the beginning of negotiations between the monarchy and the opposition groups or a pause between clashes remained unclear. Even as they chanted “we are victorious,” some protesters wondered whether they were being set up for an ambush by a military that was plotting to return.

Regardless, the sight of forces relinquishing control of the heavily fought-over square gave them a sense of confidence not seen since the protests began nearly a week ago.

RELATED: Countries in the Middle East where the ‘winds of change’ are blowing

As they ran toward the square Saturday, protesters vowed to stay and indeed started preparing for a long battle. They waved flags even as they set up tents to spend the night. They blasted chants from their loudspeakers as they collected rubber bullets to prove that the Army fired on them the last time they were here. They cleaned up bags of onions left for protesters to use if they were struck by tear gas and instead set up an on-scene medical hospital.

The opposition had said it would not consider an offer by King Hamad bin Isa Al Khalifa for national dialogue until the military left the streets. The troops began pulling out of the square around 12:30 p.m. and the police moved in. At 3:25 p.m., police officers got into SUVs and drove off in dramatic fashion. A line of more than 60 vehicles drove off together to the loud cheers of protesters who had not been blocked from entering the square.

The relative calm in Bahrain contrasted with Libya, where the regime of long-time leader Muammar Qaddafi reportedly was using deadly force to try to suppress protests demanding an end to his rule that have gripped the eastern part of the country.

Fathi, a resident of Benghazi, Libya’s second city, said the sounds of gunfire could be heard from the city center, where thousands of protesters remained in the cold rain despite attacks by security forces. More government troops were arriving in the city by plane, he said by telephone.

“I don’t know how it’s going to end,” said Fathi, who asked that his last name not be used. The government cut off Libya’s Internet connections early Saturday. “There are a lot more deaths than they [the media] are saying,” he said.

At least 84 people have died in three days of protests in Libya, Human Rights Watch said, based on telephone interviews with witnesses and hospital staff.

In Sanaa, Yemen’s capital, one person was killed and several injured in ongoing clashes.