Oslo(ANN)Police chief Sveinung Sponheim said his internet postings “suggest that he has some political traits directed toward the right, and anti-Muslim views”. “But whether that was a motivation for

the actual act remains to be seen,” he told Norwegian broadcaster NRK.
Mr Breivik appears to have created entries on social networking sites such as Facebook and Twitter, though the accounts were set up just days ago on 17 July. 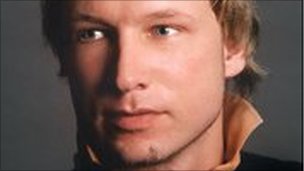 On the Facebook page attributed to him, he describes himself as a Christian and a conservative. The Facebook page is no longer available but it also listed interests such as bodybuilding and freemasonry.
A Twitter account attributed to the suspect has also emerged but it only has one post, which is a quote from philosopher John Stuart Mill: “One person with a belief is equal to the force of 100,000 who have only interests.”
In a post in Norwegian in an online forum on December 2009, a user named Anders Behring Breivik claims there is not one country where Muslims have peacefully lived with non-Muslims, stating that instead it has had “catastrophic consequences” for non-Muslims.
Mr Breivik was a member of a Swedish neo-Nazi internet forum called Nordisk, according to Expo, a Swedish group monitoring far-right activity.
Fertiliser
The gunman was described by witnesses who saw him on Utoeya island as tall and blond – and dressed in a police uniform. The image of him posted on Facebook depicts a blond, blue-eyed man.
The Norwegian newspaper Verdens Gang quoted a friend as saying that the suspect turned to right-wing extremism in his late 20s.
He had no military background except for ordinary national service and no criminal record, it seems.
Police say he is co-operating with them, answering questions.
On Saturday it was confirmed that Mr Breivik was previously a member of the right-wing Progress Party (FrP), the second largest party in Norway’s parliament.
A statement on the FrP website said he became a member in 1999 and paid his last membership fee in 2004. He was deleted from the member registry in 2006.
He was a member of St Hanshaugen FrP, a local party chapter in a borough of Oslo, in 2001-2003.
He was also a member of the FrP youth wing from 1997 to 2006/2007. He deleted his membership in 2007.
Mr Breivik is believed to have grown up in Oslo, and studied at the Oslo School of Management, which offers degrees and postgraduate courses.
He later appears to have moved out of the city and established Breivik Geofarm, a company Norwegian media is describing as a farming sole proprietorship set up to cultivate vegetables, melons, roots and tubers.
A supply company has come forward to say that it delivered six tonnes of fertiliser to this company in May – an ingredient used in bomb-making.
The FrP statement said “those who knew the suspect when he was a member of the party say that he seemed like a modest person that seldom engaged himself in the political discussions”.

As it happened: Norway attacks aftermath

0908: The BBC’s security correspondent Gordon Corera said there were comparisons with the Oklahoma City bombing in the US in 1995. He said: “That was done largely by a single person (Timothy McVeigh) with a little bit of help from others.” He said Norwegian police would want to know if the gunman had help from a network. He said: “Did he have a network or did he have military training? How did he carry out a bombing and then carry out so many killings? That does suggest some sort of experience.”
0914: Norwegian Labour politician Stine Renate Haheim, 27, told BBC News what she had seen on Utoeya: “People were saying we’re safe, the police are here. Then we saw a man in a police uniform and he starting shooting people one by one. We turned and ran. We were just trying to keep safe and trying to take care of each other. He was very calm. I didn’t hear him speak.”
0934: Via Twitter It would appear that Anders Behring Breivik, the 32-year-old suspect in the attacks, recently set up a Twitter profile. Last Sunday, the only chilling tweet from the account: “One person with a belief is equal to the force of 100,000 who have only interests.”
0931: Gordon Corera says: “There are suspicions he might have posted something on a far-right neo-Nazi website. He might have expressed strongly anti-Muslim sentiments. Clearly there was some sort of political agenda. He bombed the government offices and was going for people from the governing party. The police won’t confirm it but there seems to be a suggestion that he wants to explain his activities.”
0939: Eskil Pedersen, leader of the Norwegian Labour youth movement, told a press conference he did not see the gunman but it dawned on him that the gunshots were a continuation of the “terrorist attack” in Oslo. He said: “It’s obvious that our entire democracy has been attacked…We always look forward to it (the summer camp on Utoeya) and it has meant so much to us historically. In the Labour youth movement there are 10,000 members and there are many who feel like this…This will change Norway and hopefully for the better but it’s too early to say how.”
0949: PM Jens Stoltenberg says Norway does not have a big problem with far-right wing extremists but he said the police are looking into these groups following the attacks.
0950: Eyewitness Jorgen Benone said: “The guy was dressed as a policeman and he was trying to suggest that he was kind of helping us and he said, ‘Come here!’ He had a rifle which he was using to shoot at us. It was total chaos: people jumping into the water and trying to swim to the other side. I believe several lost their lives as they tried to get over to the mainland. Some hid behind stones