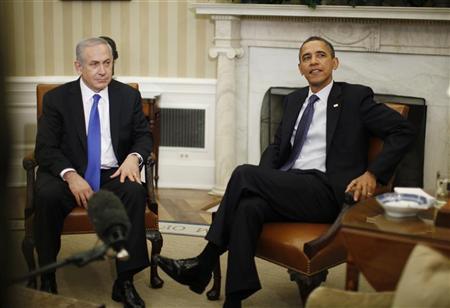 annual U.N. General Assembly after closing ranks to send a message to Iran that it may face war over its nuclear program.

Obama and Netanyahu did not meet with each other at the United Nations, where leaders and foreign ministers from the world body’s 193 member states have gathered since last week to give speeches and hold private talks to resolve conflicts and boost trade.

But the two men left the U.N. meeting with more than they arrived with: Obama with an assurance that Israel would not attack Iran’s nuclear sites before the November 6 U.S. presidential election, and Netanyahu with a commitment from Obama to do whatever it takes to prevent Iran from producing an atomic bomb.

The General Assembly, concluding on Monday, was notable for what was not accomplished. World powers failed to break deadlocks over Iran’s nuclear program, the conflicts in Syria, Mali and Congo, and the stalled Israel-Palestinian peace talks.

As in previous years, Iranian President Mahmoud Ahmadinejad assailed the United States, Israel and Europe, while calling for a new world order. He made his eighth and likely final address to a U.N. General Assembly.

The lack of substantive progress on the world’s protracted conflicts led diplomats and analysts to question the relevance of the United Nations, saying it was incapable of moving decisively as it did last year on Libya.

“The diplomatic situation at the U.N. may have to get worse before it gets better,” said Richard Gowan of New York University. “Perhaps we need a diplomatic debacle on the scale of Iraq – or a peacekeeping failure like Srebrenica (Bosnia) – before big states wake up and ask why the U.N. is stagnating.”

In July 1995, U.N. peacekeepers in Bosnia failed to prevent the massacre of some 8,000 Muslim men and boys in Srebrenica.

Analysts and diplomats argue that the lack of U.N. backing for the U.S.-led invasion of Iraq in 2003 highlighted the need for a U.N. seal of approval for military interventions. Widely seen as “illegal,” as former U.N. chief Kofi Annan described it, Western powers made certain that the NATO intervention in Libya last year had the backing of the U.N. Security Council unlike the Iraq war.

While the United States and Israel have long refused to rule out the use of military force to prevent Iran from acquiring nuclear weapons, Netanyahu has criticized Obama for failing to make clear to Tehran under what circumstances Western powers would be prepared to attack Iranian nuclear facilities.

Suggestions from Israel that he was letting down the Jewish state were an irritant Obama did not want to put up with in the final weeks before an election, especially given the way the issue has been leveraged by Republican challenger Mitt Romney.

Meanwhile, Western officials say, Netanyahu may want to avoid antagonizing Israel’s main ally and poisoning ties with the man who could occupy the White House for another four years.

Iran rejects Western allegations that it is developing the capability to produce atomic bombs – it says its nuclear program is for peaceful energy and medical purposes – and refuses to comply with Security Council demands to halt nuclear enrichment.

This has led to increasingly harsh U.N. and Western sanctions, which have caused the value of Iran’s currency to plummet.

Israel sees a nuclear-armed Iran as a threat to its existence.

In his speech to the General Assembly on Thursday, Netanyahu held up a cartoonish diagram of a bomb with a fuse to illustrate the threat of Iran’s nuclear program. He used a red marker to draw a line at the point where Iran would be close to producing an atomic bomb.

Images of “Bibi’s bomb” – referring to Netanyahu’s nickname – with its graphic “red line” representing the moment Iran can no longer be stopped from getting a nuclear weapon will likely be the defining image of this year’s assembly.

It may also join other memorable moments when visual aids were used in U.N. speeches. These include: U.S. Ambassador Adlai Stevenson’s unveiling of U-2 spy plane photos of Cuba during the 1962 Cuban Missile Crisis, and U.S. Secretary of State Colin Powell’s flawed intelligence briefing seeking to make the case for war with Iraq before the March 2003 U.S.-led invasion.

Netanyahu praised Obama for telling the General Assembly that the United States will “do what we must” to prevent Iran from acquiring nuclear weapons and acknowledged that there was still room for diplomacy. Harsh sanctions, Netanyahu said, could probably persuade Tehran not to build a nuclear weapon.

But the Israeli leader also hinted at war. He said Iran’s enrichment plants were visible and vulnerable to attack and suggested that a decision on force could come by next spring. Tehran’s U.N. mission responded by saying Iran has the means and right to retaliate with full force against any attack.

Israel, presumed to be the region’s only nuclear power, has twice destroyed sites it feared could be used to develop atomic weapons – in 1981 in Iraq and in 2007 in Syria.

Syrian Foreign Minister Walid al-Moualem was among the last speakers to address the General Assembly. On the final day of the session on Monday, he accused the United States, France, Turkey, Qatar and Saudi Arabia of hijacking what was a domestic crisis by supporting rebels with arms and money.

Russia, an ally of Syria, and China have vetoed three Security Council resolutions condemning Assad’s government. Both made clear they still oppose U.N. sanctions against Syria or new measures against Iran, which Western nations accuse of propping up Assad’s government.

One Western ambassador, speaking on condition of anonymity, told Reuters: “If I were a member of Assad’s government, I’d be very happy Syria’s getting short shrift at the U.N. If I were a rebel, I’d be pretty disappointed with the U.N. right now.”

The Palestinians, whose aspirations for their own state are now taking a back seat at the United Nations to Iran, Syria and the Arab Spring, were probably also disappointed by the General Assembly.

A year ago in New York, Palestinian President Mahmoud Abbas announced his bid for full U.N. membership for a Palestinian state, sparking excitement at the General Assembly and the West Bank. The request wilted in the face of U.S. opposition.

This year, Abbas announced he was looking for a less-ambitious status upgrade at the world body that would make it a “non-member state” like the Vatican, instead of an “entity.” There was no excitement at the General Assembly or the West Bank.

(Editing by Will Dunham)
source  Reuters